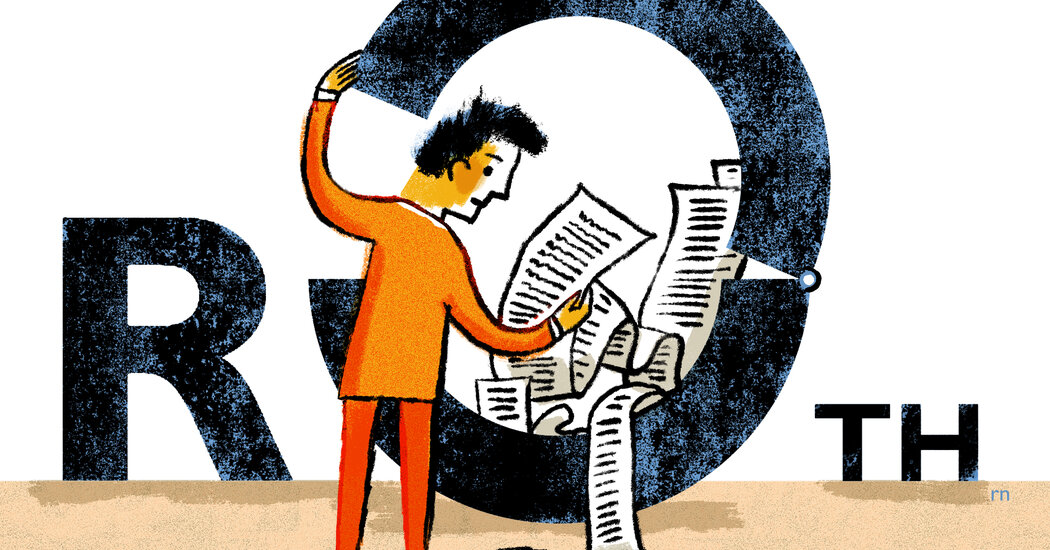 The $1.7 trillion federal spending bill that President Biden is expected to sign in the coming days includes dozens of changes to retirement plans. It makes it easier for employers to help workers open emergency savings accounts, assist employees who are repaying student loan debt and give more part-time workers access to retirement plans.

But fans of so-called Roth accounts may find the most to chew on: There are new twists to both Roth individual retirement accounts and Roth 401(k)s, including an intriguing opportunity to move leftover money in a 529 college savings account to a Roth I.R.A.

My colleague Tara Siegel Bernard wrote an overall guide to the legislation this week. Below, you’ll find details and explanations on the Roth provisions, which I gathered from the bill itself; a Senate Finance Committee summary of retirement provisions; Senate staff; and experts from Fidelity, Vanguard, the College Savings Plans Network and the Plan Sponsor Council of America.

Roth accounts are different from a standard workplace 401(k) or 403(b) and the everyday I.R.A. because of the way Roth investors pay income taxes.

With non-Roth accounts, you deposit money in such a way that you can avoid paying some income taxes that year. Later, when you withdraw money, you generally pay income taxes, according to your income tax bracket at that time.

With Roth accounts, you deposit money and pay income taxes on it that same year. When you withdraw money, you usually don’t have to pay taxes on your earnings in the account. There are certain rules you must follow to avoid taxes and penalties, and there may be income restrictions for depositors. I.R.S. Publication 590-A has more details.

Roths come in a few flavors. First, there’s the I.R.A., which individual investors can set up through their own brokerage accounts.

There is also the Roth 401(k), which employers can make available to workers.

If you’re new to retirement accounts, you can read my “How to Win at Retirement Savings” guide or Tara’s “Young Person’s Guide to Investing.”

Under the 2022 Roth I.R.A. rules, you don’t have to start withdrawing money at age 72, as you do with regular I.R.A.s. If you don’t need the money in the Roth, you can allow the entire balance to keep growing.

Employers can offer matching contributions to Roth 401(k)s the same way they do with regular 401(k)s. Currently, however, that Roth match has to go into a regular 401(k) account, before you pay income taxes on it. The new rule gives employers the option to let employees choose between putting the match in a Roth 401(k) or a regular one. It will take effect as soon as the overall bill is enacted.

Why does this matter? One advantage to Roth accounts is that you can deposit money when your income tax rate is relatively low — say when you’re younger and your income is lower. Then, decades later, when your tax rate would presumably be higher, you can withdraw many years of earnings tax-free.

Current retirement account rules allow people who are 50 or older (at the end of a calendar year) to put money away for retirement that exceeds the normal annual contribution limits. This allows people with money to spare to catch up on savings if they think they have not saved enough.

In workplace retirement accounts like 401(k)s, you can currently put the catch-up money away before you pay income taxes on it, as you would with normal 401(k) contributions. But once the new bill is signed, those who earn more than $145,000 will have to put the catch-up money into a Roth 401(k) starting in 2024, which means they’ll pay income taxes on it before making the deposit.

For decades, some parents have avoided putting money into 529 college savings accounts because of one big concern: the possibility of having to pay taxes and a penalty if they someday no longer needed the funds for higher education expenses and wanted to withdraw the money. The scenario might arise if a child doesn’t go to college, for instance.

The College Savings Plans Network has long advocated a rule that would allow parents to move leftover money into their own retirement accounts or a new one for a child. Adults who had previously chosen to put a child’s college savings ahead of their own retirement savings could get an instant boost. Alternatively, young adult children could get a running start on savings, courtesy of parental largess.

The new bill solves for at least some parental angst. Many families with leftover 529 savings would be able to move it to a Roth I.R.A. starting in 2024. There is a $35,000 lifetime limit on these transfers per account beneficiary, plus a few other restrictions that aim to keep this from being too much of a wealth transfer extravaganza for affluent families.