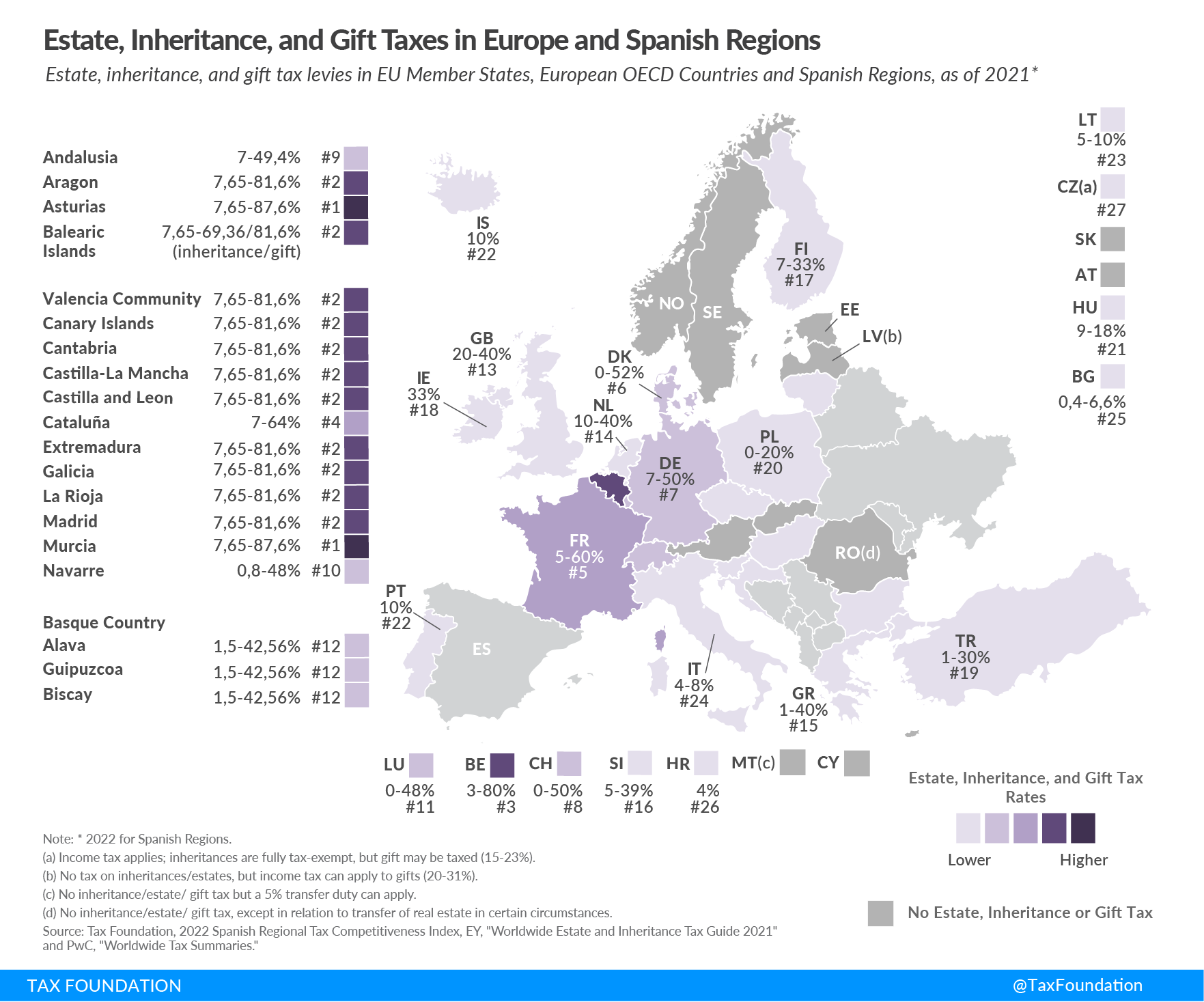 Tax Foundation recently released the 2022 International Tax Competitiveness Index (ITCI) measuring the competitiveness and neutrality of countries’ tax systems. Since 2020, Spain has dropped from 26th to 34th (out of 38 countries) in the ITCI due to multiple tax hikes, new taxes, and weak performances in all five index components.

In Spain’s case, some of the 40 tax policy variables in the ITCI are set by regional governments. Therefore, the Spanish Regional Tax Competitiveness Index (RTCI) complements the ITCI by comparing the 19 Spanish regions on more than 60 variables in five major areas of taxation: individual income tax, wealth tax, inheritance tax, transfer taxes and stamp duties, and other regional taxes, combining the results to generate a final ranking.

Spain scores poorly on corporate tax policy, ranking 31st, due to a combination of factors. First, Spain has both a patent box and a credit for Research and Development. Second, it is one of the eight countries in the Organisation for Economic Co-operation and Development (OECD) that has implemented a digital service tax (DST). Third, it has a relatively high corporate tax rate of 25 percent, above the OECD average (23.6 percent). And some regions have rates above Spain’s general corporate income tax rate, like Navarra at 28 percent.

Although tax competition helped keep tax hikes under control in some regions, 13 still have top marginal tax rates higher than Germany’s (47 percent). Some regions in Spain, like the Valencia Community, have the fourth highest top-income tax rate in Europe (54 percent), after Denmark (55.9 percent), France (55.4 percent), and Austria (55 percent). Valencia’s top statutory rate applies to income above €475,000 ($470,250) while Austria’s only applies to income above €1 million ($0.99 million). Denmark has a high tax rate because it does not rely on social security contributions as part of its tax mix, as Spain and other countries do.

Spain ranks 19th on its consumption tax component. However, less than 50 percent of consumption is covered by the value-added tax (VAT) due to exemptions that complicate the overall system and distort consumer choices. A broader VAT base could create fiscal space for lowering the overall VAT rate of 21 percent.

Additionally, Spain levies a net wealth tax as well as inheritance and gift taxes. However, not all regions in Spain levy a net wealth tax. In 2008, when the Spanish central government repealed the net wealth tax and then reintroduced it three years later, Madrid preserved 100 percent relief from the tax. Following the example of Madrid, Andalusia approved in September 2022 100 percent relief, while Galicia is looking to increase its tax relief from the current 25 percent to 50 percent. The rest of the Spanish regions levy a progressive wealth tax ranging from 0.16 percent up to 3.75 percent in Extremadura. Today, only two other European countries levy a net wealth tax—Norway and Switzerland—and at much lower rates than the Spanish regions. Norway levies a net wealth tax of 1.1 percent, barely more than one-fourth of the top wealth tax rate in Extremadura, while the top wealth tax rate in Zurich, Switzerland, is only 0.7 percent. Although most OECD countries have repealed their wealth taxes, Spain’s central government announced a new wealth tax with a top tax rate of 3.5 percent in response to the wealth tax relief in Madrid and Andalusia.

Similar to the net wealth tax, the inheritance and gift taxes in Spain are collected and administered by regional governments. Regional statutory inheritance tax rates in Spain can reach levels as high as 87.6 percent (in Asturias), depending not only on the level of the amount inherited but also on the inheritor’s level of pre-inheritance wealth and familial closeness to the inheritor. Unsurprisingly, Spanish regions have the highest inheritance tax rates in Europe; 13 Spanish regions levy a higher top statutory tax rate than the 80 percent rate applied by Belgium.

Tax competition has proved effective; some Spanish regions are already copying Madrid and other leading regions’ tax reforms. Castile and Leon, for example, improved seven places overall (from 13th to 6th in the RTCI) after reforming the inheritance tax. In 2022, Andalusia was the first region to cut the top statutory inheritance tax rate from 81.6 percent to 49.6 percent, just below Germany’s and Switzerland’s top tax rate of 50 percent.

While inheritance and gift taxes collect little revenue, a recent study revealed that inheritances can reduce wealth inequality as transfers are proportionately larger (relative to their pre-inheritance wealth) for households lower in the wealth distribution. And this is especially true for Spain where inherited wealth as a portion of net wealth reaches 95.6 percent. Therefore, given their limited capacity to collect revenue and negative impact on entrepreneurial activity, savings, and work, policymakers should consider repealing inheritance and gift taxes. Currently, 12 OECD countries have no estate, inheritance, or gift taxes: Australia, Austria, Canada, Colombia, Costa Rica, Estonia, Israel, Latvia, New Zealand, Norway, Slovak Republic, and Sweden.

Spain’s tax reforms are not stopping here. The central government plans to introduce a new wealth or solidarity tax and again raise the top capital gains and dividend tax by 2 percentage points to 28 percent. The offsetting of tax losses for entities belonging to a consolidated tax group will be limited to 50 percent of that amount (currently 70 percent) for the following two years. In exchange, the corporate income tax for small businesses would be reduced to 23 percent.

While the central government is not planning to adjust the income tax brackets for inflation, it has proposed a slight reduction in the effective tax rate for households earning less than €21,000 per year. However, while the withholding tax will be reduced and the amount of income tax paid during 2023 by low-income households will be cut, it is not clear that these households’ final income tax bills will be reduced.

If these policies are implemented, they will reduce the country’s overall ranking in the 2023 ITCI from 34th to 35th. The corporate income tax rank will fall from 31st to 32nd while the individual tax score will be slightly reduced and the property tax rank will drop from 37th to 38th.

These new tax hikes have the potential to negatively impact capital formation, growth, and economic recovery. As public spending, debt, and taxes are increased, Spain’s current economic challenges could turn into a long-term recession. Policymakers should avoid unnecessary tax hikes and consider repealing wealth and inheritance taxes, the financial transaction tax, and the digital services tax. To increase private investment and accelerate economic growth, Spain should consider full expensing for capital investment and shift the tax mix towards less harmful consumption taxes by broadening the VAT tax base.

Spain should implement tax reforms that have the potential to stimulate economic activity by supporting private investment and employment and attracting highly qualified workers while increasing its internal and international tax competitiveness.

Consol Energy (CEIX) and Whirlpool (WHR): 12/2/2022 Bull & Bear
Mark Cuban cold-called the Dallas Mavericks’ CEO to get her to take the job
Why labor economists say the remote work ‘revolution’ is here to stay
Here Are the 401(k) Contribution Limits for 2023
‘This is a crisis.’ Why more workers need access to retirement savings