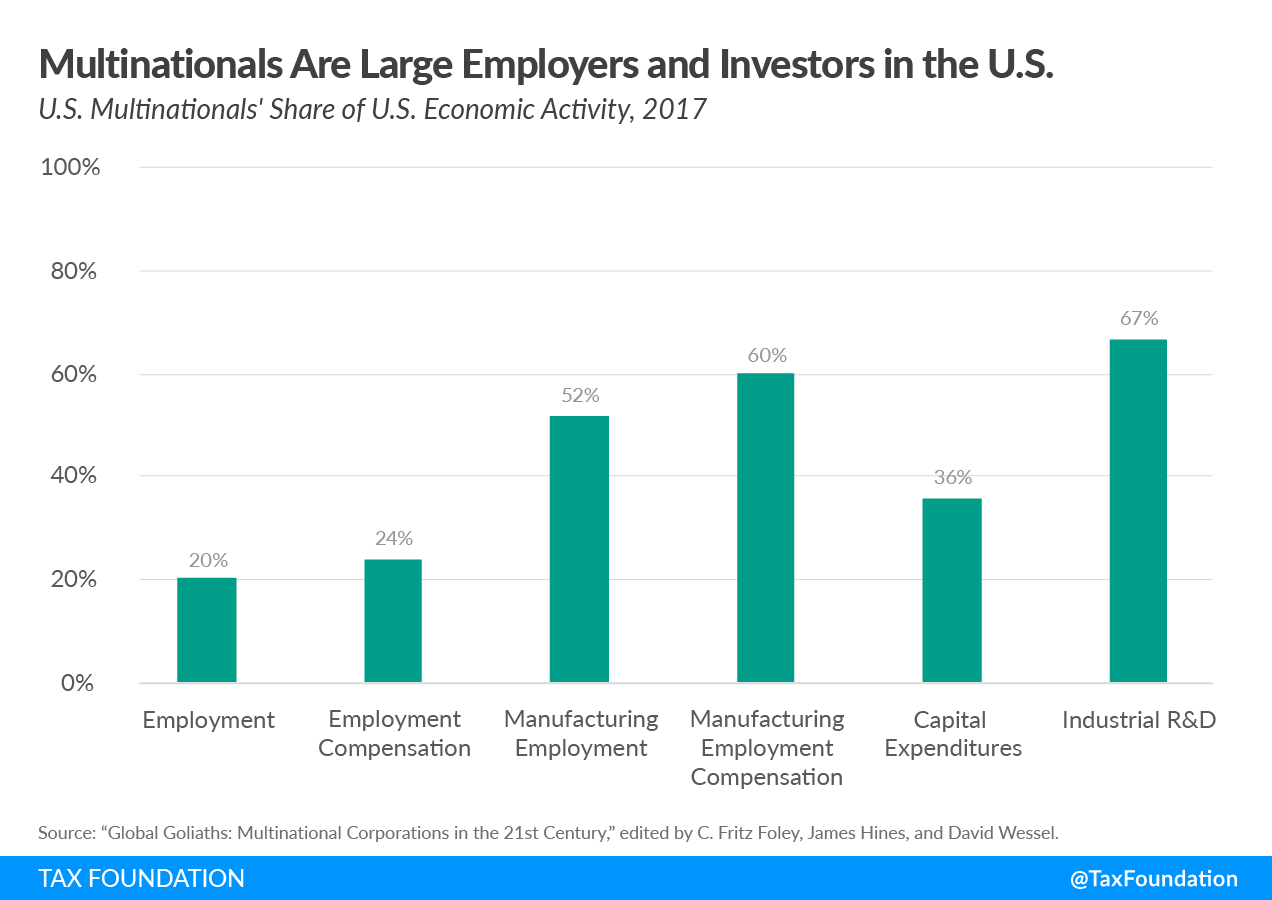 The Biden administration has offered several proposals to reform the taxation of U.S. multinationals, addressing profit shifting as well as a broader view that offshoring is bad for the U.S. economy and firms should be encouraged to “reshore” as much activity to the United Sates as possible. Contrary to the Biden administration’s claims, raising taxes on cross-border investment would hurt U.S. economic growth and jobs. Research shows that FDI creates jobs in the U.S. and raises workers’ wages and productivity.

Some commentators view outbound FDI as harmful to the U.S. economy, believing that U.S. multinationals are substituting foreign workers for U.S. workers and causing job displacement domestically. While such substitution can occur, multinational activity more often serves as a complement to American industry, not a substitute.

Multinationals are among the largest employers in the U.S. In 2017, U.S. multinationals accounted for nearly one-fifth of the private sector workforce, and more than half of manufacturing employment. They account for an even larger share of total compensation. In manufacturing alone, about 60 percent of all wages paid are from U.S. multinationals. And as noted above, their contributions to R&D are equally significant, accounting for two-thirds of all industrial R&D in the U.S., as shown below.

Multinationals account for a large share of compensation because they tend to pay higher wages and offer better benefits than other comparable private sector jobs. In 2017, both U.S. parents and U.S. affiliates of foreign multinationals paid more than $10,000 more per employee in total compensation than comparable U.S. private sector firms. One analysis by McKinsey finds multinationals are responsible for nearly 40 percent of productivity gains since 1990, which has bolstered wage growth throughout the U.S. economy. In part, multinationals have helped shift U.S. industries from low-value-added jobs to high-value-added jobs, such as R&D and other service-based activities.

Of course, the shift has imposed transition costs on certain communities in the U.S., as occurred during the China shock. But the evidence more broadly suggests that even as corporations have expanded their operations outside the U.S., it has not always come at the cost of the U.S. workforce. Between 2004 and 2014, nearly 42 percent of U.S. multinationals that expanded abroad also expanded their U.S. employment. Of the multinationals that did shrink their foreign workforces, about half also reduced their employment in the U.S. Multinationals tend to expand their operations both domestically and abroad as they become more profitable, and shrink them as they become less profitable.

One view holds that multinationals primarily operate abroad due to lower regulatory costs and availability of cheap labor. While such factors drive some offshoring decisions, U.S. firms in a globalized economy do not only sell to U.S. consumers, but to foreign customers as well. As such, for many firms, it is often more efficient to operate in countries closer to their foreign customers. Such “horizontal” FDI is most prevalent: U.S. multinationals prefer to invest in middle-income countries, such as China, rather than low-income countries, such as in Africa. These middle-income countries, according to World Bank classifications, accounted for just under half of employment at U.S. multinationals’ foreign affiliates in 2017, while the majority of investment still occurred in high-income countries.

From 1987 to 2011, almost 95 percent of foreign affiliates of U.S. multinationals in the manufacturing industry sold at least some goods to their local market, and 37 percent sold exclusively to their local market. Even when looking at foreign affiliates of U.S. multinationals that produce abroad and then export their final goods or intermediate inputs to the U.S., most of the exports are from developed countries. Among the top 10 countries that export to the U.S., only one-third of total exports are from developing countries, mainly China and Mexico.

Industry-level data also shows a similar pattern for U.S. FDI activity. Input-output measures developed by Antras and Chor (2018) show the largest outbound FDI industries are also the largest inbound ones. That is, most activity is primarily selling to final consumers in local markets (either at home or abroad), rather than focused on lowering the input costs of the production process. Expanding market access allows U.S. multinationals to be more profitable, which can result in profits reinvested in the U.S., often raising U.S. workers’ wages.

If taxes were raised on cross-border investment as advocated under President Biden, it could lower U.S. productivity, reduce U.S. jobs, and result in lower wages for many workers. One paper looking at developing countries found that outbound FDI increased the countries’ total factor productivity in the long run. Another study examined 50 countries including the U.S. and found outbound FDI was positively associated with long-run economic growth. And yet another analysis generally found a positive link between local employment rates and outbound FDI in the U.S., although some regions did experience increases in inequality between low- and high-skilled workers.

Policymakers must tread carefully as they redesign the tax system for multinational corporations or they will risk raising taxes on cross-border investment more broadly and stifling U.S. growth.

Dodge’s first electrified vehicle will be a new crossover called the Hornet
Top 7 Tax Tips for College Athletes
Starbucks operating chief to depart as company eliminates role under ‘reinvention’
Looking for an offbeat European holiday? This island has its own rules, language and vodka
Tesla hedging: New ETF gears up to attract hesitant investors