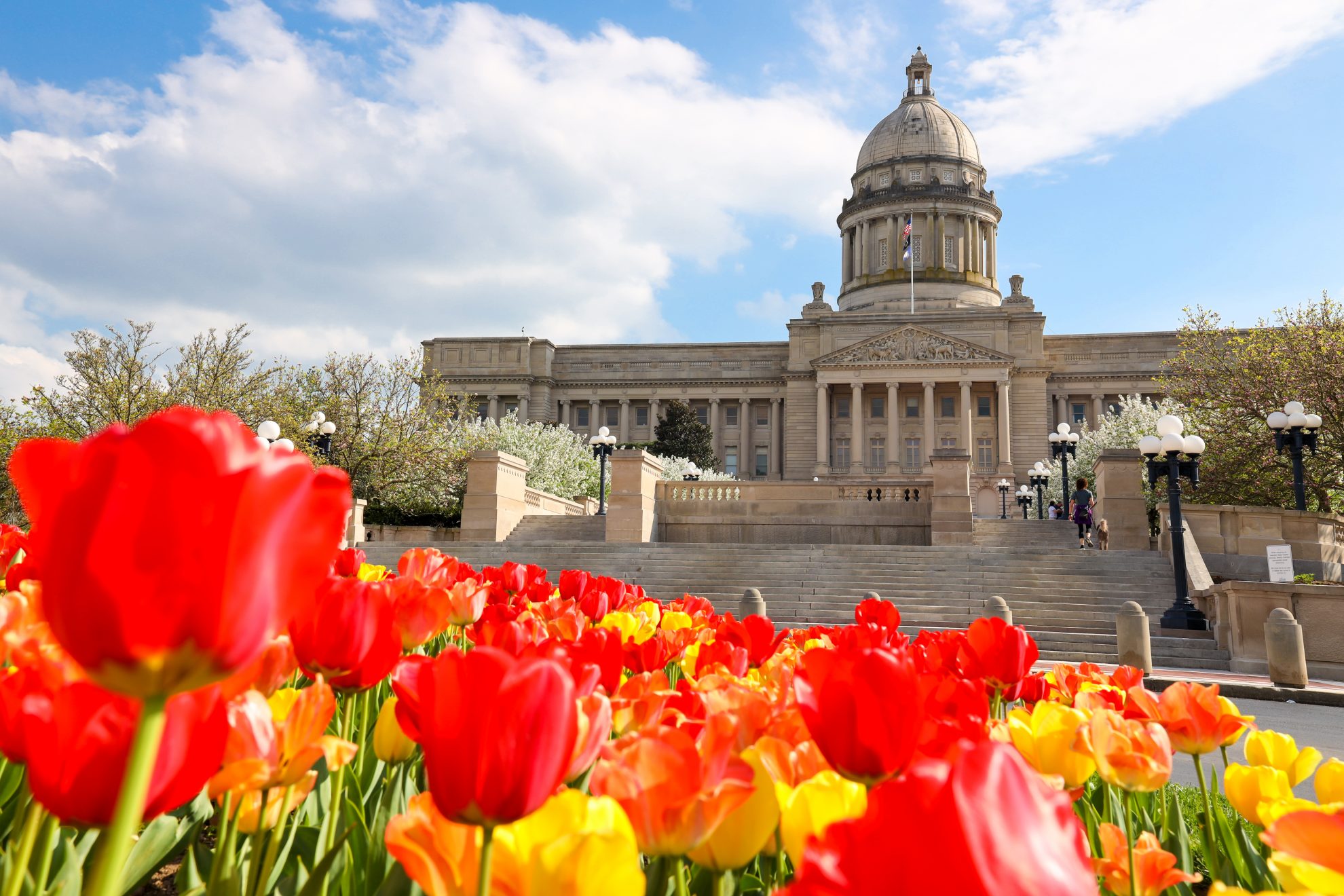 After weeks of closed-door deliberations between legislative leaders in Kentucky’s House and Senate, lawmakers on March 29 unveiled and quickly adopted a committee substitute to House Bill 8, which passed both chambers with a veto-proof supermajority that same day. The amended legislation uses tax triggers to reduce Kentucky’s individual income tax rate, with the possibility of eventually phasing out the tax over many years using future revenue growth. The bill also broadens the sales tax base and imposes new taxes and fees on electric and hybrid vehicles.

Some of the tax changes in the bill are more structurally sound than others, but, as a whole, these changes move Kentucky’s tax code in the right direction. In particular, dialing down the individual income tax rate will promote economic competitiveness and growth, setting the stage for additional pro-growth reforms in the near future.

Within these parameters, individual income tax rate reductions in both 2023 and 2024 are highly likely. Kentucky ended FY 2021 with a $1.1 billion surplus that raised the BRTF balance to nearly $1.9 billion, or more than 16 percent of GF spending. Furthermore, the most recent revenue forecasts for FY 2022 project Kentucky will end the current fiscal year with $1.9 billion more revenue than was planned for when the FY 2022 budget was enacted. At the end of March, legislators passed a biennial budget for FYs 2023 and 2024 that leaves approximately $1 billion unappropriated to accomplish these tax cuts.

While the bill text is written such that a reduction in 2023, if triggered, would occur automatically, any reduction triggered in future years would require a “future action by the General Assembly” before taking effect. While contingency clauses requiring future legislative action are not typically seen in tax trigger statutes—as the purpose of triggers is to automatically induce tax changes if or when certain conditions are met—this language does provide yet another safeguard to ensure triggered tax cuts occur only when the legislature agrees they are fiscally prudent.

A flat individual income tax rate of 4 percent would make Kentucky’s income tax substantially more competitive, especially given that Kentucky is surrounded by several low- or no-income tax states. Currently, among all the states levying an individual income tax, only neighboring Ohio and Indiana, in addition to Pennsylvania and North Dakota, boast a rate below 4 percent.

On the sales tax front, the bill broadens the sales tax to additional services to offset a small fraction of the planned income tax cuts. Consumer services newly taxed under the bill include personal fitness, massage, athletic instruction, cosmetic surgery, parking, auto clubs, household moving, and additional event admissions and labor services. Taxing consumer services modernizes the sales tax and generates new revenue in a structurally sound way, all while injecting progressivity into the sales tax, since services tend to be purchased more frequently by middle- to higher-income consumers. However, the bill’s expansion of the sales tax to various business inputs—most notably marketing, telemarketing, lobbying, and website-related services—is inadvisable, as this further exacerbates the tax pyramiding that is already occurring with the taxation of other business-to-business transactions in Kentucky.

As discussed in prior analyses, sales tax pyramiding occurs when one sales tax is levied on top of another. When businesses pay sales taxes on the goods and services they buy, those tax burdens frequently get passed along to consumers in the form of higher prices of goods and services sold at retail. Then, when an ad valorem sales tax is appropriately levied on the price of the final good or service sold at retail, the final consumer ends up paying more in sales taxes as a result, and in a nontransparent manner.

Some of the services newly taxed under the bill—such as social event planning and the rental of event spaces—are consumed by individuals and businesses alike. In these cases, the most efficient way to avoid taxing business-to-business purchases is to include the service in the sales tax base but allow businesses to present sales tax exemption certificates to receive an exemption when making an otherwise taxable purchase. This is a policy change that Kentucky lawmakers ought to consider in the future.

While a fiscal note for the final legislation is not yet publicly available, the income tax reductions planned under this bill can be expected to reduce taxes by a much larger amount than will be newly generated through sales tax expansion, with cuts largely funded by overall revenue growth. However, some businesses will see a net tax increase due to the taxation of additional business inputs, especially since the bill triggers reductions to only the individual income tax, not the corporate income tax.

In addition to the income and sales tax changes, the bill includes several excise tax changes. Notably, the bill seeks to bring uniformity to the taxation of all vehicle rental services—including ride sharing, peer-to-peer car sharing, taxicabs, limousine services, and traditional car rentals—by taxing these services at a rate of 6 percent (matching the sales tax rate). This is functionally quite similar to including these services in the sales tax base, as is appropriate, although the administration of this excise tax may differ slightly. Additionally, HB 8 creates a new tax on energy distributed through electric vehicle charging stations and new registration fees for electric and hybrid vehicles.

Taken as a whole, this package of reforms continues the modernization of Kentucky’s tax code, building on the state’s 2018 reforms. If Kentucky’s individual income tax rate were 4 percent and the sales and excise tax changes were fully phased in today, Kentucky would rank 16th overall on our State Business Tax Climate Index, up from 18th today.

While a substantially lower individual income tax rate will help Kentucky compete regionally and nationally, other areas of its tax code—highlighted in our recent Kentucky tax reform options guide—remain in critical need of reform. Moving forward, policymakers should prioritize repealing the limited liability entity tax (LLET), as well as reducing the corporate income tax rate. On the local tax front, policymakers should work to phase out all local income taxes, including occupational license and net profit taxes. This can be done by allowing a local option sales tax to replace the revenue currently generated through local income taxes. Repealing local inventory and inheritance taxes should also be a priority.

Notably, some progress could still be made on local tax reform this year when the legislature reconvenes for two days next week. Two bills addressing local taxing authority, HB 475 and 476, have passed the House and await consideration in the Senate. If passed by the Senate with a 60 percent supermajority, HB 475 would not need to be approved by the governor, as it proposes a constitutional amendment that would instead need to be approved by voters. Specifically, this legislation asks voters to amend the constitution to allow the General Assembly to authorize a local sales tax administered by the state with a base that matches the state sales tax base. HB 476, meanwhile, specifies that if the constitutional amendment is adopted, local taxing authority will only extend as far as is authorized by the General Assembly through state statute, and that local sales taxes will not yet be authorized by the legislature. This will give the legislature additional time to consider ways to trade off local sales and income taxes.

Separate from the changes included in HB 8, the General Assembly made progress toward a better UI tax structure with HB 4, which was enacted in March over a gubernatorial veto. Among other changes to Kentucky’s unemployment compensation (UC) system, this law allows new employers to qualify for a lower UI tax experience rating—known in Kentucky as the contribution rate—after one year instead of three, a proposal we recommended.

All in all, Kentucky is making commendable progress toward a more modern and competitive tax code, but more work on comprehensive tax reform should be prioritized next session.

Hackers can bring ships and planes to a grinding halt. And it could become much more common
Bed Bath & Beyond replaces CEO as retailer’s sales plummet
Stocks making the biggest moves midday: Bed Bath & Beyond, Carnival, Upstart and more
Op-ed: Hiring freezes have started and job losses are coming. Take these 5 steps now to get your finances ready
The Fed has been clear, but the economy still isn’t ready for the big rate hikes ahead, Wells Fargo CEO says