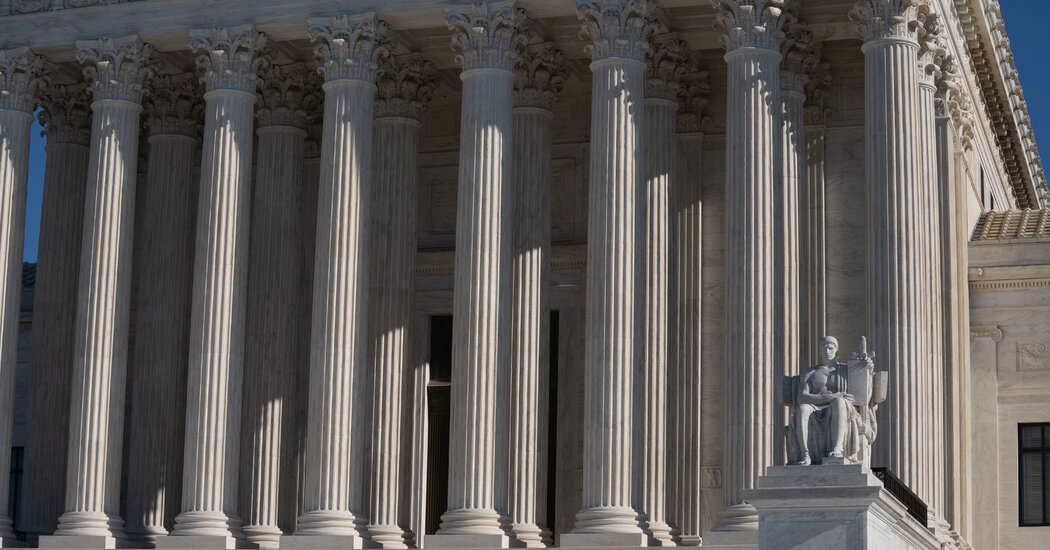 Both sides agreed that generic statements about firms’ integrity and honesty can sometimes be the basis for securities fraud class-action suits.

WASHINGTON — A frustrated Supreme Court heard arguments on Monday in a securities fraud class-action case against Goldman Sachs, with several justices indicating puzzlement about what they were meant to do in light of both parties seeming to agree about the governing legal standard. Two justices, using the same metaphor, said they saw little daylight between the two sides.

The case was brought by pension funds that said they had lost as much as $13 billion as a consequence of what they called false statements about the investment bank’s sales of complex debt instruments before the 2008 financial crisis.

The contested statements were abstract and general. One example: “Our clients’ interests always come first.” Another: “Integrity and honesty are at the heart of our business.”

The plaintiffs argued that those statements and others were at odds with what they said were conflicts of interest at the firm, which they accused of packaging and selling securities intended to fail even as it and its favored clients bet against them. Goldman has denied deceiving investors.

The United States Court of Appeals for the Second Circuit, in New York, said Goldman’s statements, in context, were enough to allow the case to proceed as a class action.

Kannon K. Shanmugam, a lawyer for the investment bank, said the case involved “exceptionally generic and aspirational statements” that could not have affected its stock price. But he conceded as a general matter that courts could take account of generic statements in deciding whether investors had relied on them.

Thomas C. Goldstein, a lawyer for the pension funds, said the firm’s statements in context justified certifying a class action. But he conceded that the generic nature of the statements was “relevant evidence.”

The two sides’ positions had evolved and converged during the litigation, Justice Amy Coney Barrett said. “It seems to me that you’ve both moved toward the middle,” she told Mr. Goldstein. “They’ve backed off on how important they think generality is and whether it can be decided categorically. But you’ve also conceded that generality is relevant.”

“So now we are left, you know, in this position where you’ve both moved more closely together,” she said, “and now we have to decide what to do about the Second Circuit’s opinion.”

A divided three-judge panel of the court of appeals said its ruling relied on a presumption created by a 1988 Supreme Court decision, Basic v. Levinson, which said investors claiming they were defrauded by false statements in securities filings need not show they had relied on the statements. Instead, it said, they could rely on a presumption that all important publicly available information about a company is reflected in its stock price.

Sopan Joshi, a lawyer for the federal government, said it was possible that generic statements could be quite meaningful in the case argued Monday, an argument that had been repeated in briefs filed by the pension funds and their supporters.

“Goldman Sachs was dealing with a lot of financial instruments in which conflicts were extremely important, both to the company” and to the “reputational advantage that it enjoyed over its competitors and peers, and the industry more generally,” he said. “In this case, even highly generic statements about conflicts did, in fact, have a price impact.”

Mr. Joshi, who did not argue in support of either side, added that the government took no position on whether that analysis was correct, and he urged the justices to instruct the appeals court to address it.

Though all three lawyers agreed that courts may consider whether generic statements affected stock prices, they differed on what should happen in the case, Goldman Sachs Group v. Arkansas Teacher Retirement System, No. 20-222.

Justice Stephen G. Breyer suggested there may be nothing for the Supreme Court to do, as its main job is to announce general legal principles rather than to decide particular disputes. “This seems like an area that, the more that I read about it,” he said, “the less that we write, the better.”